College admission is highly influenced by the quality of the high school. The Ivy leagues and other top-tier colleges and universities (mainly privates) have “feeder” high school that send steady stream of students. The admission counselors place an incredibly high confidence on applicants who are coming from their designated feeder high schools. And, it is practical too. For an example, if a college or university receives 40,000 applications and has only 10 admission counselors, it is an impossible task to read through each of the completed applications when one application can go over 15 pages (common app, 2 recommendations, transcript, personal essay etc.) in a few weeks (regular decision reading period: January through March). Who has the time and energy to read 40,000+ pages in six weeks or so?

The key to secure college admission starts with a good high school. Between a good public high schools or private high school, there can be some difference between the quality of the students who secures college admission. Since private high schools charge tuition (often as same as college but provide financial aid as well), it is a safe bet to say that they also train/educate the students well. The general presumption is public high schools feed public colleges and universities while privates feed private colleges and universities. The colleges and universities are looking for students who are well-prepared to complete four years of college, get a good job, go to politics or start a business etc. and become good citizens of the society as well as donating alums. The "donating alumni" is an important factor in private colleges/universities because they tend to allocate institutional aid dollars by using the earnings from their endowment.

There isn't much reliable information out there that tracks quality of public high schools. The quality of a public high school is a self-fulfilling prophesy. For an example, I live in Hamden which is in the bottom of the below list. The property prices in Hamden are substantially lower than that of Orange which is in the top of the list. When public high schools are of good quality the demand for properties goes up, and when demand goes up, the price goes up.The mill rate which determines how much property tax the resident pays (mill rate of 1 means, if the property is $1000, the resident pays $1) is based on the assessed value of the property (70-80% of sale price). When value of the property is high so as the tax base and so as the money available for the public school district. They can hire the best teachers and have the best resources available for their students. Consequently, the school district rating goes up.

There is another side to the story though. It is related to the concept called "college-towns" such as New Haven, Hamden, Middletown, Bridgport, Fairfield etc. in Connecticut. Some private and/or public colleges and universities are located fully or in-part in these towns. New Haven (Yale, Albertus Magnus, UNH, Southern), Hamden (Yale, Quinnipiac, Southern, Albertus Magnus), Middletown (Weslyan), Bridgeport (BU, Secred Heart) and Fairfield (Fairfield, Secred Heart). Most of these private colleges are non-profits that provide jobs, and do not pay property taxes at all or pay a very small amount. Since the demand for services such as police, fire and infrastructure is high in college-towns, the portion of the tax allocated for education is relatively small, with that the quality of the public high schools drops. But, college-towns have amenities such as walking trails, restaurants, spa, yoga, shopping, golf, nail salons etc. (One outlier in the above towns is Fairfield which borders New York and home to many folks who earn their incomes from New York City.)

Even though this explanation relies on towns in CT, it holds true for any town in New England area.

Below is the Public High School Quality Index (PHSQI) that I have created for towns that are located near Hamden. This index takes into account a) 20 characteristics of the town b) two tested quality indices c) weight factor. 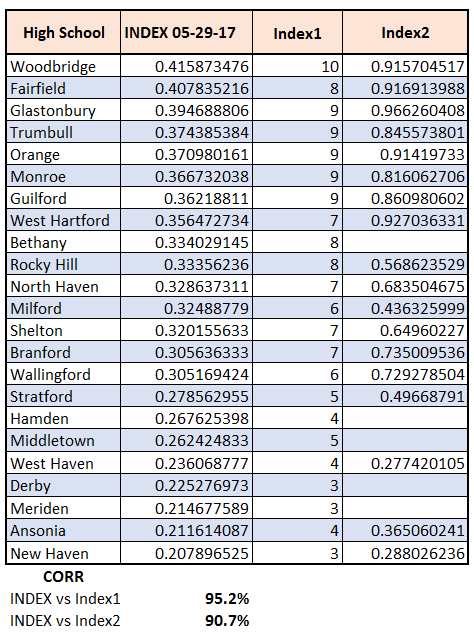